Home / Are We Running Out of Helium?

Helium is an integral element to quite a few operations and industries, including as a cooling agent for large machinery. However, most of us only consider Helium to be the gas we use to make our party balloons float or raise the tenor of our voices to a comedic high. Just like everything recently, Helium prices have been rising and reports of low supplies have been causing many people to wonder, “Are we running out of Helium?” When it costs double to fill up balloons for a party the general public notices, while many industries, such as healthcare have already taken note.

While it sounds like a yes or no question, the answer is slightly more complicated and there are many factors at play. This isn’t the first time this question has been asked, nor will it be the last.

Why is Helium Important?

Helium is the second lightest element after hydrogen and the second-most common element in the universe. Helium mostly comes from pockets of gas that are trapped beneath in the Earth. However, because it is so light and does not combine well with other elements, it escapes Earth’s atmosphere very easily once it reaches the surface. In order to use helium from the Earth, we recover this trapped helium, separate it from other gases, and purify it for its variety of uses and applications. Additionally, helium can be liquified from the air, but this process is much less common. 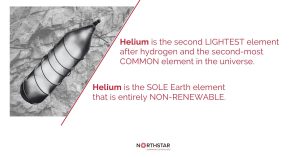 Helium is the sole Earth element that is entirely non-renewable. However, there are many other characteristics of this lighter-than-air element that make it invaluable to a variety of industries. It is exceedingly light, a tiny molecule, frictionless at certain temperatures, the coldest substance on Earth in liquid form, and fully non-reactive. These properties make helium perfect for cooling, maintaining controlled conditions, leak detection, medicinal procedures, and airborne activities like lifting blimps and balloons.

How Helium Is Harvested

Helium occurs naturally in space, however, the helium gas that can be found on earth is both limited and slightly more difficult to come by. Earth helium is made naturally underground by the radioactive decay and decomposition of specific materials, like uranium and thorium, and trapped underground with natural gas.

“The richest helium accumulations are found where three conditions exist: (1) granitoid basement rocks are rich in uranium and thorium, (2) the basement rocks are fractured and faulted to provide escape paths for the helium, (3) porous sedimentary rocks above the basement faults are capped by an impermeable seal of halite or anhydrite. When all three of these conditions are met, helium might accumulate in the porous sedimentary rock layer.1”

Once the helium is located, we need to get the helium from its resting place underground. Drilling for helium requires a drill rig and the operation is the same as drilling for oil & gas.

Next, the helium needs to be separated from other natural gases, namely nitrogen or methane.

The natural gas’s temperatures are lowered and a nitrogen rejection system is employed to remove it. Within the nitrogen, the helium gas condenses. A cryogenic separation device is utilized to separate the nitrogen gas from the helium gas so that the helium can be adequately stored for future use.

Back to the Question at Hand: Are We Running Out of Helium?

In some ways, yes. First, it is a finite resource. Also, because helium is so light and does not combine well with other elements, it rises easily to the very top of our atmosphere and out into space, never to be utilized again. In this case, perhaps better questions to be asking might center around how much helium is estimated to be left in the Earth or discussing the price fluctuations of helium.

Much of the story about how much helium we have is related to supply and demand. The United States National Helium Reserve holds the majority of the world’s helium supply. They can store helium gas in excess of one trillion cubic meters. Governmental organizations ordered this organization to sell most of its helium reserves by 2015, regardless of the price they could fetch for it.

The goal was to enable the government to recover the expense of creating the reserve. Helium use has increased significantly, yet the law hasn’t changed. As a result, by 2014, a large portion of the helium reserves on our planet were being sold at absurdly low prices.

Where Do the Current Helium Reserves Stand?

There is good news that helium is more abundant than previously believed in other parts of the Earth, such as groundwater. Therefore, even though we are using up the helium reserve, it appears that we will not run out of helium anytime soon.

We are producing more and more helium because we get our helium from natural gas, which we are pumping out in greater quantities than before.

Natural gas demand has increased, so we should continue to have plenty of it on hand without having to use any of the stockpile of helium.

The fact that we’re developing better techniques for recycling and recapturing wasted helium is another important aspect of this predicament. There are now ways to preserve the gas rather than just letting it dissipate in the atmosphere and vanish forever.

There you have it! Helium may be non-renewable, but we are not running out of it anytime soon. Helium exploration is one of the many downhole services that Northstar Downhole Specialists offer, in addition to expert open- and cased-hole drill stem testing, mini-fracs, closed chamber testing, and more. Visit our website to learn about us and our reliable, adept downhole technology.